The Technology City of the South 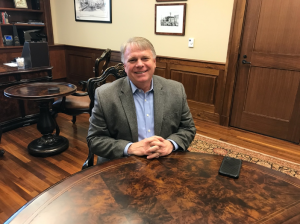 By now, most people are aware of Alpharetta’s nickname, “The Technology City of the South.” But, do you know its history? Our data-rich infrastructure dates back to the 1980’s when businessman and former presidential candidate, Ross Perot, purchased land along North Point Parkway and laid fiber optic cable throughout the area. Around the same time, developers were constructing the housing communities that many of us live in today.

Fast forward 30+ years and the technology investments that root our foundation remain just as critical as ever. Alpharetta has more workers per square mile (4,632) than most major metropolises, including Denver, Houston, Charlotte, Nashville, Austin and even Atlanta. To retain the more than 700 technology companies that already call Alpharetta home, while continuing efforts to attract new ones, the city is constantly seeking novel ways to enhance the community. Along with the rapidly changing technology and business climate, we must adapt to foster innovation. One way to do this is by harnessing collaboration, and Tech Alpharetta’s Innovation Center and Strategic Advisory Board are a vital piece to this.

Today, modernizing the infrastructure and enriching transit to help people seamlessly get around to enjoy everything our city has to offer, are two of our main priorities. Examples of these investments include the Alpha Loop, designed to improve the city’s walkability and the Eco District, to further the live, work, play model while bringing affordable housing to attract young tech workers. The city is also working to expand the Greenway, which residents have been enjoying for more than 20 years, to run through Alpharetta’s core, including Northwinds Parkway and the Northpoint corridor. We feel these efforts are critical to keep places like Avalon and City Center thriving.

Outside of technology, hospitality is another area that has seen tremendous growth. We’re seeing more people visiting the city for business and returning for pleasure. To meet this demand, the hotel industry is rapidly expanding.

Undoubtedly, it’s an exciting time to be a part of the Alpharetta community, one I have enjoyed for more than 20 years, both professionally and personally.