On Wednesday March 23rd, the GATN board had the pleasure of attending “Angel Investing In Atlanta,” hosted by the Greater North Fulton Chamber of Commerce, sponsored by GATN, and presented by the Atlanta Technology Angels (ATA), one of the largest angel networks in the country.

Bernie Dixon, President & Chairman of ATA, and Mike Siavage, Chair, Syndication Committee, provided an overview of angel networks, including how they fit into the funding landscape and the secret behind the strength of ATA. 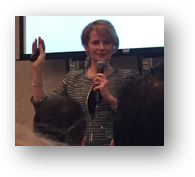 The primary goal of ATA is to help entrepreneurs and new companies be successful. Unlike what viewers see on “Shark Tank,” angel investing is typically not about making money at all cost or being heavily critical of ideas or companies. In fact, ATA enjoys mentoring entrepreneurs with good ideas and will identify areas for improvement, including evolving the pitch or hitting key startup benchmarks that would improve the potential for deal creation.

The 2015 Halo report lists pre-money valuation of seed deals reached $4.6M; up 53% from 2014. In addition, Gust.com reported that Q3 2015 saw a 25% increase in funding over same quarter the previous year. Dixon provided a summary of the three national trends helping to drive growth in angel investing.

Angel investing is becoming more mainstream due to the rapid growth of startups in the technology sector like Facebook and Amazon. Shows like “Shark Tank” have helped make “angel” a well-known business term. The increased visibility has led to a rise in the number of investors getting into the space.

The growth of internet platforms like Kickstarter, Indiegogo, and AngelList has increased accessibility to both funds and inventors from anywhere in the world. Although these sites broaden the investment community and increase awareness, serious investors still like to meet the CEO of the company face to face and often find value in investing close to home. Many ATA members are Georgia residents and enjoy investing in local companies making a positive impact on the community.

The Jumpstart Our Business Startups Act (JOBS Act) encourages funding of US small businesses by easing a portion of the security regulations. Additional state laws and taxes have been passed to make it easier and more attractive to invest in startups. In Georgia, these include the Invest Georgia Fund, the Georgia Angel tax credit, and the Invest Georgia tax exemption.

As a result, ATA currently receives about 50 applications a month and uses a four-stage deal creation process to evaluate the companies and the markets they’re serving. Although the group has had successful exits, its primary purposes are mentoring, evaluating, advising, coaching, and leadership. Investors who join ATA benefit from the mature processes it has developed and the diverse experience of the board.

Due to the rising popularity of the organization, ATA is looking into creating a new chapter in the Greater Alpharetta area. Investors and entrepreneurs interested in learning more can visit AngelAtlanta.com for information.